With all the pressure on students to excel at more traditional subjects, you wouldn’t be blamed for postponing computer science (CS) education. The diminished role CS takes in traditional schooling can partly be attributed to the lack of CS in our public school system. Other countries, such as Scotland and China (Guardian, 2012, BigThink, 2015), are already leading the way in CS education, and for good reason. There are numerous research studies that suggest many benefits to students studying CS at an earlier age – and we’ll examine some of the most important reasons together.

This goes beyond the ‘practice makes perfect’ maxim – you can’t jump straight into complex algorithms and expect to understand. Fortunately, the basics of programming are now ever-more accessible for young students, thanks to a range of programs, games, and activities (Papadakis, Kalogiannakis, 2017). By mastering the basics early, students can more easily grasp complex aspects later in life. Angie Schiavoni of CodeEd provides the following metaphor:

“It’s kind of like the best way for kids to play soccer is not to just learn how to dribble or just learn to pass the ball, but to get out on the field and play soccer, a lot. Then you can fine tune your skill set later.” (ComputerScienceOnline.org) 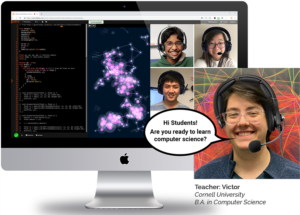 Interested in seeing if computer science is right for you/your child? Click here to take a live, online trial class!

Children’s brains grow and expand at a rate that is never matched as they get older (Olsho, 1984).

During this rapid brain development, many neural connections responsible for cognitive advancement and developmental intelligence are at their critical time for growth (Edwin Gordon 2003). Young brains also have more plasticity (Frances Jenson, 2015), which is why this is the prime time for children to adapt and pursue new skill sets, such as language, music, and coding (ComputerScienceOnline.org). Furthermore, young learners, as opposed to adults, have less physical and emotional influences that might interfere with their learning process, such as the demands of a career, self-consciousness, or social pressures (howtoadult.com).

CS uses logic, syntax, and other skills that are beneficial for core subjects like science, math, and language (Hayden, 2016). It also shapes how one thinks and processes information – a skill known as ‘computational thinking’. Computational thinking is closely linked to sequential thinking, it’s a type of thought-processing defined by logical problem-solving. It can be compartmentalized into decomposition, pattern-recognition, abstraction, and algorithms (BBC).

In their thoroughly researched book, Connected Code, Yasmin Kafai and Quinn Burke talk about the benefits beyond computational thinking. They expand on concepts of digital literacy to discuss how those who are able to code play a greater role in affecting the future. They call this ‘computational participation’. Far from being a solitary practice, computational participation requires social, collaborative work with other ambitious individuals (Connected Code, 2016). They repeatedly discuss the DIY culture of digital ‘making’ and how it takes confidence to share CS concepts with others; when students build this confidence at a young age, it continues in later life (Kafai, 2016). By making students computational participants, you empower them with the confidence and the know-how to shape tomorrow’s world, not just to inhabit it.

Thanks to both the skills and confidence it brings, Microsoft and others have shown that students who study CS at a younger age are considerably more likely to follow STEM studies and careers (Microsoft). In fact, computational thinking, digital literacy, and computational participation are all advantageous in employment and further study later in life. Code.org estimates that CS jobs are growing at twice the national average (Code.org). Even if a direct CS career isn’t on the cards, it’s a vital skill in all manner of careers, from engineering to architecture. Being digitally literate will open countless doors, many of which won’t have even been invented at the time of writing. With increasing automation and a world-in-flux, nobody knows what the career market of 10 or 20 years-time will look like, but learning CS is an assured way to stay ahead of the curve.

Delaying study until college may mean that students miss the opportunity to discover a possible passion or career path.

By college, students will be busy with countless other priorities, so exploring CS may be an inconvenient option. Learning CS at a young age ensures students are ready to capitalize on a vast multitude of opportunities. In the words of Gabe Newell, co-founder of gigantic video-game developer Valve:

“The programmers of tomorrow are the wizards of the future, you’re going to look like you have magic powers compared to everybody else.”

Don’t want to take our word for it? Watch giants of the tech, music, and sports worlds talking about the advantages of learning to code early

It’s never fun to fight from behind to catch up, this is especially true for complex subjects like CS. Studying CS early is easier, good for confidence-building, great for the developing brain, vital for further study and work, and more accessible than ever. Computer science is the future and coding is the lingua franca that it will be written in. For most students, there aren’t many clear advantages of studying it later; the phrase, “there’s no time like the present” springs to mind.

Interested in seeing if computer science is right for you/your child? Click here to take a live/online trial class!