Hello everybody! It’s been a while but we’re back and we have a few updates.

From now on, we will be posting on this blog once a month. We will provide any and all updates about KTBYTE, as well as featuring either one of our students or magnificent TAs (Teaching Assistants)!

To get us started, for this month we will be introducing our full-time instructors, so that you can get to know our team. 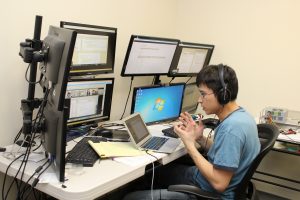 Alma Mater: Cornell University
Favorite thing to do in Boston?

Sailing. I started sailing when I was in Seattle, and I loved it. It is relaxing and it takes my mind off of everything else. When you’re sailing, you are completely focused on the boat, and you have nothing else to worry about.

What did you do before KTBYTE?

I worked for Amazon, where I worked on the Kindle and the Amazon Echo.

It’s so easy to make something on a computer. Within computer science, the barrier of entry to making something is so low compared to other things. For example, you can’t build a car for yourself, you can’t build your own processor, but if you want to build an app or if you want to build a website, you can. CS makes it so easy to create things. At this time, you can’t be in a STEM field and avoid CS courses or topics. Even in social sciences, CS helps you a lot with things such as data analysis. In general, CS teaches you to think and process in a methodical way.

If you could steal credit for any great piece of art, song, film, book, etc, what would it be?
There is one picture that I really like. I have a poster of it at home, and my wife won’t let me hang it, but I love it. It’s a zebra rooster contemplating grilled cheese. I love this piece of art, and everyone that comes to my place either loves it or hates it. Sometimes they just look at it, but they never ignore it. (See below; Credit: “Rooster Zebra Contemplating Grilled Cheese” by Matt Forderer) 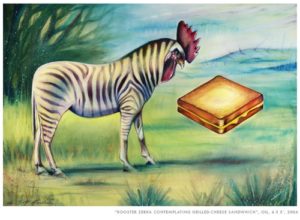 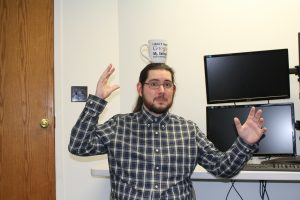 Favorite thing to do in Boston?

I think the favorite thing I’ve done was canoeing down to the fireworks display for the Fourth of July last year.

What did you do before KTBYTE?

I was doing math tutoring at home for a while, teaching computer science and math. Before that, I did development at Microsoft.

For everybody, [CS] is a lot of fun. I’m an engineer. I like engineering because you’re building things and you get to see them work. And CS is the best kind of engineering! You don’t have to actually build it physically – you type something and it appears right in front of you, and that’s very satisfying. It also has a lot of applications that you can use for exposure to cool ideas in science, consumer applications in business, and various other fields that overlap with CS. If you like to see your work immediately produce results, making things with programming is a great way to do that.

If you could have one superpower, what would it be, and what would you do with it?

I would choose flying. It just seems like so much fun! I would use it to relax after a long day, go home to see people, fly across the country, and commute to work to skip the suburban Boston traffic.

What animal would make the best president if the animal kingdom ever rises up and takes over society?

My favorite animal is definitely a cat. My family has always been a cat family. However, I don’t think they would be interested in running the place, so I’d probably go with the great cats. Lions have a lot of organization, power, and pride, which would probably make them pretty good at delegating work. 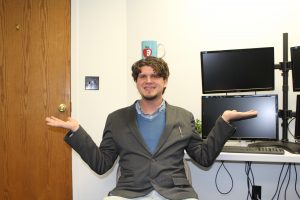 Favorite thing to do in Boston?
I would say go to the aquarium or eat whoopie pies.

What did you do before KTBYTE?
I taught computer programming at a different company, and before that, I taught English in Japan.

What animal would make the best president if the animal kingdom ever rises up and takes over society?

If you could steal credit for any great piece of art, song, film, book, etc, what would it be?